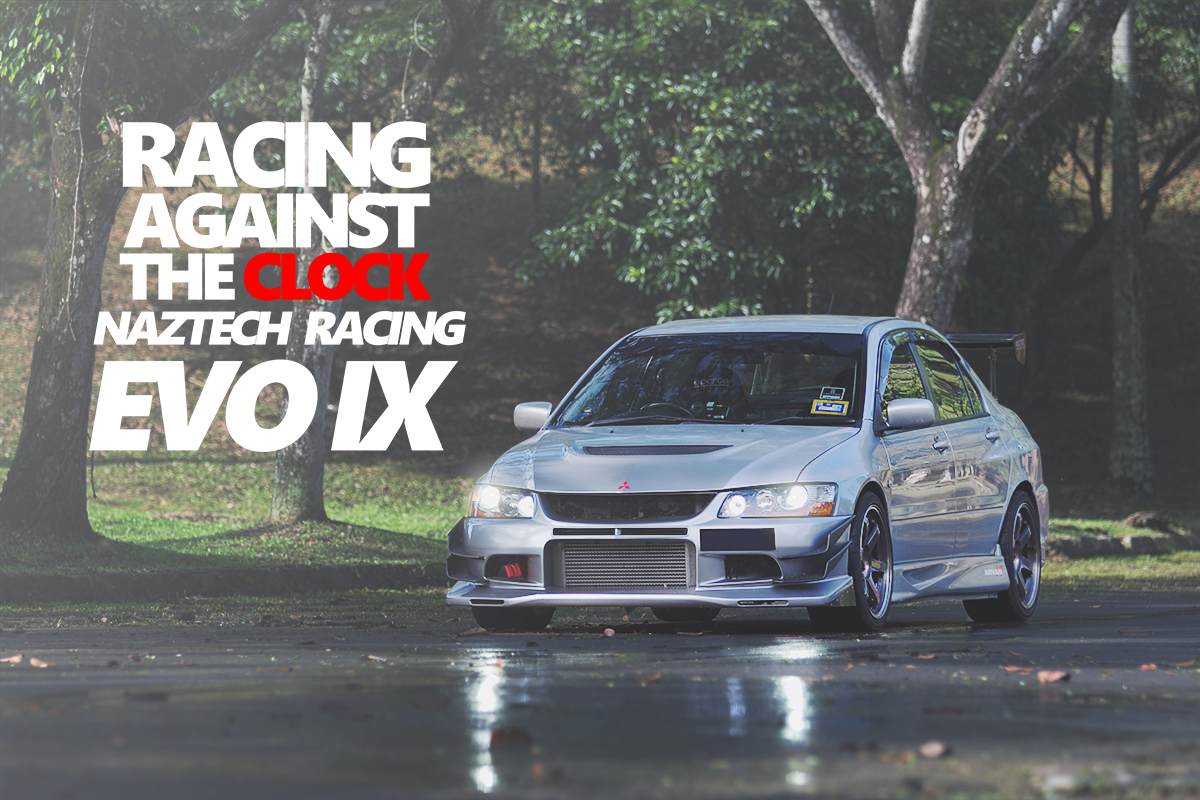 Menacing? The Mitsubishi logo on the hood is certainly unusual.

Beside being known for rallying, the Mitsubishi Lancer Evolution is well known for its time attack achievement too with notable cars such as the HKS CT230R, Cyber EVO and Tilton Interior’s Racing EVO. Father and son racing team, Naztech Racing decided to build a street registered time attack car using a Mitsubishi Lancer Evolution IX due to its successful track record. We first spotted this Lancer Evolution IX during the ZeroToHundred Time To Attack 2015 Round 2. After finding out more details about them, we were impressed with what we saw and decided to ask for a feature.

Voltex street front bumper and canard is derived from the development of the infamous Cyber EVO. The street version does not have a carbon front lip/undertray/splitter combination.

Voltex Type V GT Wing is as used on the Cyber EVO. However, Naztech Racing did not opt for the extended riser or gurney flap option. Functional? Certainly well proven with two consecutive back to back outright victory at WTAC 2010 and 2011.

Naztech Racing came into existence back in late 2011 when the father, Naza decided that he wanted to move on from go-karts. He decided on taking part in Malaysias Touring Car(MTC) division of the Malaysian Super Series(MSS). When shopping around for a base car to build their racing car, they decided on the ubiquitous Proton Satria Neo because they had access to good resources on how to build one. Hence, a Proton Satria Neo Clubsport was purchased as the base car to be turned into a racing car. After 3 seasons, they have decided to call it quits on MSS because Naza wanted to drive his toy everyday, not 5 events a year. That, coupled with the high cost of operation due to logistics and a 3 day scheduled event made time attacks seem appealing. Because you can drive a street registered car to an event and race, it simplified logistics and associated costs a lot. Besides, you can actually enjoy the car on a daily basis of which Naza does often.

There is not much to see even in the engine bay.

The intercooler piping kit came from a US manufacturer, Injen.

After selling off the Satria Neo race car to a friend, the shopping for a street car to be turned into a time attacker begin.  They narrowed down the choices to a Mitsubishi Lancer Evolution, a Subaru Impreza WRX STI or a Nissan Skyline GT-R R34. The GT-R was ruled out first due to its extra weight. Due to its past track record, the Mitsubishi Lancer Evolution became the obvious choice. Seeing a clean example on sale, they decided to acquire it. After some basic preparation, the getting know a new car process begin at the track.

EVO enthusiasts will also know that the ARC titanium heat shield for the exhaust manifold is not cheap nowadays. Looks certainly can be deceiving as there is a Garrett GTX3076R from ATP lurking underneath. This is made possible due to US manufacturer, ATP produces a turbine housing that mates the Garrett CHRA to a stock Mitsubishi twin scroll flange.

After some testing at the Sepang International Circuit(SIC), the son, Mizi decided to run a higher spring rate in the rear of the car then front after he did some research on specific forums. This might seem strange to a lot of people, but it is actually one of the correct ways to setup an EVO. The motion ratio of the multi link rear suspension of an EVO is much lower than the front, a stiffer spring in the rear suspension is needed to bring the effective spring rate to match the front of the car. After making this small but critical setup change, Mizi knew they were steering into the right direction with the development of the EVO as the balance of the car and its tendency to understeer at limit is further improved. The other major change they made after acquiring the car was a conversion to a 5 speed manual transmission from the 6 speed transmission. While you may have worse refinements for highway cruising after this swap, you end up with a much stronger gearbox along with more gear ratio options directly from Mitsubishi. This is certainly a swap that is opposite of what is common locally here in Malaysia!

Their personal best around SIC is 2:32.7 running Advans Neova AD08R 255/35/18 and 2:32.8 with Hankooks RS3 265/35/18. If they can repeat this result, they should be able to step on the podium of TTA for the Street Turbo AWD class. This is a pretty respectable result as they only make 370WHP on the Dynojet with the opposition usually sporting much higher hp. Naztech Racing shows that if you do your homework and modify accordingly, you can get an EVO to perform well on the track.

From this picture, you can see the ARC titanium catback exhaust along with Whitelines rear anti roll bar.

For the future, they hope to go faster with more seat time and further development of the car. Future plans include a stroker kit, widebody kit and wider wheel/tyre setup. Do lookout for Naztech Racing, they may just go onto the podium on the next TTA event!

The wheel spec is 18×9.5+22 all around with 255/35/18 Advan Neova AD08R. As you can see, this is a rather aggressive fitment that requires a fender pull on the rear to clear. If you are unwilling to perform such extensive fender work, it is a good idea to stick to offset of +30 or above when using 9.5JJ wheel on a CT9A EVO.

Finally, here is a video of their best lap :