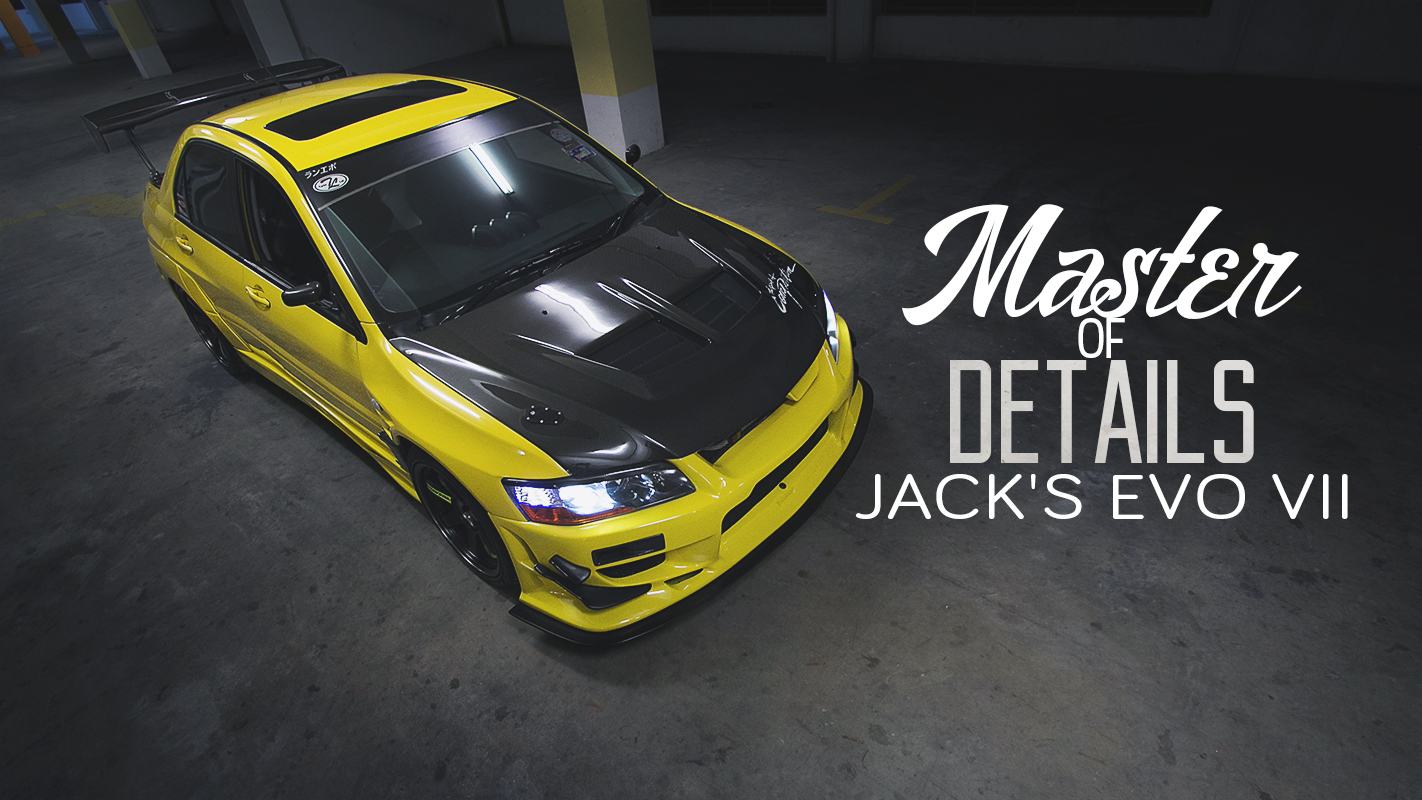 There are car’s that you see and you know you have to feature it. Jack’s Lancer Evolution VII is one of those car. I first knew about this car from the now defunct zerotohundred.com magazine issue #06 because they did a feature on this very Lancer Evolution VII when BRC is not even an idea yet. It took me quite awhile to find out who is the owner and asked for the feature. For the third feature of our Lancer Evolution special, we bring you a build that will stand up to the test of time as Jack builds this car for no one but himself.

The ride height may seem a little bit high, this is because Jack intend to keep his car 100% streetable.

Instead of the more commonly used Voltex rear diffuser, Jack opted for a Varis rear diffuser for EVO IX bumper. Personally, I prefer the design of Varis to Voltex.

While the seat spot headrest and side rest protection from Bride, it is actually a Corbeau Pro Series full carbon fiber seat.

The 7 point roll bar is a custom item from Ultra Racing that is specifically fabricated for Jack’s EVO VII.

It is fair to say that this particular Lancer Evolution VII is lucky enough to have Jack as its owner. Jacks interest in the Lancer Evolution developed during the heyday of the Lancer Evolution WRC days when Jack was still a university student. Iconic drivers such as Colin McRae, Marcus Gronholm and Tommi Makinen were his heroes. He owned a Satria GTI prior. After the chance to test drive a friend’s Satria GTI during his early adulthood, he bought one when he had the means to do so. During his ownership, the Satria GTI was pretty well modded with coil on plugs, turbo etc. However, like fate for a lot of Satria GTIs, unintended change of ownership took place to his own Satria GTI too. So, he decided to get a Lancer Evolution that he had always wanted and the rest as they say, is history.

As mentioned in the article, Jack’s engine bay is amazing. You can spot detail such as vacuum hard line, a lot of an fitting, heat shield and well co-ordinated colour scheme. While it may not be flashy, it will stood to test of time.

Here is all the an fitting and hardline. The only non hardline in the picture is the hose/nozzle for Coolingmist water methanol injection kit.

Judging from the mod list, it is fair to say Jack is a very meticulous owner. There is a lot of parts not commonly found in a street EVO such as the Syvecs S6 standalone ECU with plug and play harness, Quaife helical ATB center differential, a Shepard Racing 4.09 final drive for the 6 speed manual transmission, full hard line for vacuum hoses etc. As a matter of fact, Jack’s EVO is the first car i came across ever with hard line for vacuum hoses! The cost and labour to do this dictates that only the most dedicated owners with serious attention to detail will go down this route. When Jack popped up his engine hood, there was certainly a wow factor to it. The theme is co-ordinated well with yellow and black as the theme and I have never ever seen this much of AN fitting in an engine bay. Jack shows that, with some planning and knowing what you want, you can have an aesthetically pleasing engine bay while still remaining highly practical/functional.

The wing mount is affixed to a larger CF plate to provide support for the gt wing as Jack is worried that the CF trunk is not strong enough support the load and he is not keen on repeating the Cyber EVO WTAC 2010 incident.

Jack try to be cheeky by affixing a Ralliart logo to the grille area of C-West front bumper.

Besides the appearance of the engine bay, Jack did experiment with different engine configurations. His first built engine was a common 100mm stroke 2.3L build. While this provides a lot of torque, he is itching to try something more radical. So, he commissioned GT Auto to build him one of their signature 93mm stroke based 2.2L engine. A configuration like this with longer connecting rod will lessen the side load which is a desirable characteristic for higher revving performance engines. To further increase the reliability factor of the engine, he sent the piston rings, piston pins, engine bearing and oil pump to be WPC treated. WPC treatment is said to reduce friction and it is not a procedure commonly done locally. Paired to a custom machined TD05HRA-16G6C-10.5T turbocharger with GTX3076 spec internal, 450WHP@1.6bar and 490WHP@1.9bar is archived on GT Auto’s in house Dynojet machine. Jack is super happy with the outcome of the new engine build and it is one of his favorite mods ever done. The other favorite of his is the wheel choice/fitment in the form of Volk Racing’s TE37SL Black Edition 18×9.5+22. This is certainly a suitable choice of wheel for a build of this caliber.

The side mirror is a TCS CF item. It is not a common item found locally.

To properly fit the Voltex style rear overfender and allow for more aggressive wheel fitment, rear quarter panel need to be cut. Jack have that done to utilize the advantage of rear overfender.

Jack mainly uses this car as his touge machine with occasional trackday visits. Don’t be surprised if you spot him on the touge route that everybody loves on the weekend. Overall, Jack is pretty happy with where the car is currently. He would love to make improvements to the braking, cooling and aero for the future. Don’t dismiss the possibility of an EFR turbocharger setup though. Till then, this EVO VII will remain Jack’s pride and joy for the foreseeable future and will continue evolve.

Wheel fitment shot. Despite not being the most aggressive setup, Jack is happy with the fitment.

All nylon braided stainless steel hose with AN -6 fitting