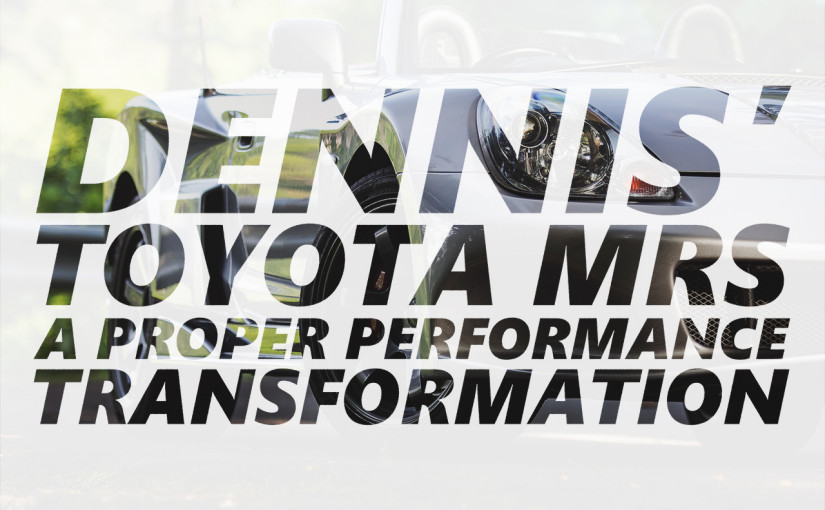 Rollin’ in the deep.

Does this scene remind you of a certain Japanese video?

Life is good with the top down.

The stigma of the W30 Toyota MR-S being looked down upon as a proper performance car after the MR-2 SW20 is one that is well known amongst car enthusiast. Because it only came with 140hp in stock form, most people would write it off as not being a serious performance car – but not Dennis, the owner of this fantastic MR-S that we are featuring today. Hopefully the story of Dennis and his MR-S will help change that perception.

The W30 Toyota MR-S is the third generation of the popular Midship Runabout series produced by Toyota between 1999 and 2007. The first generation was designated as the AW11 while the second generation was the SW20, followed by the third (and last) generation which had the chassis code ZZW30. There are no successors thereafter the ZZW30 (at the moment from Toyota). The very car we are featuring here is a JDM ZZW30 MY2000 manual example.

It was during his college days that Dennis first saw a Fiat X1/9; it caught his attention and was intrigued by the oddness and there began his interest in cars. Without being big headed into getting a car beyond his means, he hoped to find an affordable little 2 door sports cars in the future over the little sedans we are expected to purchase as our first car.

Naturally after he began his working life, he stumbled upon a MR-2 AW11 at a particular function. It was red, looked flashy enough, and began scouring said car on listed ads in the newspapers for over a year. He finally bought an AW11 MR2 and discovered it was an original supercharged unit, as opposed to a swapped version. He got hooked and loved the mid mounted engine vehicle because of the nimbleness (non-intrusive weight) of the steering feel. Probably the typical unique feel shared between MR (mid engine) & FR (front engine, rear drive) layouts, as opposed to a FF (front engine, front wheel drive). However, the joy was short lived, his MR-2 got written off because it was horrifically smashed from the rear by a drunk driver while his MR-2 was parked.

You can see there are a lot intricate details on the Reckless GT300 widebody conversion.

The view after you open the rear hatch is, rather plain, but remember, this is a daily driver.

It was some years after, Dennis started shopping for something to replace his aging AW11. He had set his sights on an MR-2 SW20 and so, scouted several listings for sale but it didn’t offer him, what he felt off the AW11; something was missing. He wasn’t quite sure.

At that point, he heard of the subsequent MR2 replacement by Toyota. He researched books and did some investigation by reading some notable editorial drive magazines from the UK that compared the MR-S to its contemporary rivals and it did quite well. He was quite determined to add the ZZW30 MR-S as his drive nirvana. The problem was having to look for a way to finance an MR-S ZZW30 in Malaysia at the time. We all know of our hefty tax on imported vehicles and its structure. And yes, Dennis probably begged, borrow and stole (not true) to own the car of his dreams. To this day, its been 15 years and counting since he’s been the owner of this fine machine. Pragmatic bugger he may be, or delusional, some of us would probably settle for something spectacular but not him.

A 2ZZ-GE engine from the last generation Celica resides here which churns out an additional 50HP when compared to the stock 1ZZ-GE unit.

The evergreen Volk Racing TE37 wheel. This is a pretty special set as the spec is 17×7.5+0(F) 17×8.5+0(R) which was destined for another widebody conversion for MR-S and this is one of the 100 sets produced as special run.

Besides being a mid-engined sports car, the other attraction for Dennis to the MR-S was the affordable maintenance that wouldn’t burn a big hole in his pocket. Being a proper car enthusiast, he prefers a car that he can drive as often rather than having his ride lodged at a workshop, either waiting for replacement parts or being repaired. Prior to him having the MR-S, he flirted with the idea of owning an Italian sedan. That (Italian) car had all of the charm, but none of the joy of when you actually keep it. Well, thats probably typical of Italian cars from the 90s, I guess.

Believe it or not, Dennis uses this 2 door, 2 seater MR-S to commute everywhere as his daily driver! It certainly is rare to see a driver use such a seemingly impractical sports car with minimal luggage capacity as a daily driver.

This is the fitment shot that shows how does the TE37 sit in relative to the rest of the car.

Being a keen car nut, the first thing he added to his ride were TRD coilovers, anti roll bars and braces, and frequently took part in local autocrosses to help him understand the cars behaviors within limits (safely), for it to pay dividends for long drives through twisty B-road routes. It’s safe to say that this car puts a smile on his face everytime. Because Dennis prefers to keep the ethos of the MR-S and enhance it strengths, a 2ZZ-GE engine transplant eventually was added to supplement the next phase. Not to mention the reliability of the MR-S is kept intact because of the OEM nature of this swap.

As you will notice, there is a good number of high-quality and hard-to-get JDM parts in this car. Among them is a set of Ohlins coilovers, the Techno Pro Spirit titanium exhaust, a Reckless GT300 wide body kit conversion and a set of Volk Racing TE37 17×7.5+0 17×8.5+0 wheels that were specially produced for another MR-S wide body kit conversion. It is also interesting to note that this is the only MR-S in Malaysia with the Reckless kit. Dennis’ favorite part of the car is the Techno Pro Spirit titanium exhaust, thanks to the sound it produces; quiet when idling, it still manages to makes a sweet racket once you step on it. It was this unique titanium sound that got its notoriety when being hunted by (larger displacement) supercars at times.

Want to go for a drive?

One unique enhancement that is worth mentioning is the retrofitting of a late model MR-S’s complete front lower braces. It was a chance discovery the front clip when it landed on Malaysian shores. The idea of retrofitting the full front lower bracing came into his mind, and for him his ideal of a sorted MR-S was full cycle coupled with the above mentioned enhancements.

It is safe to say Dennis is a dedicated MR-S owner. Every modification or enhancements were thought of, pondered about and executed without sacrificing an arm and a leg. For him at the current moment, the build of this Spyder has more or less provided him with the drives he strives for. And only If Dennis manages to find the budget, this MR-S may get a dose of forced induction (while trying to keep the mid-ship spirit intact). Hopefully this MR-S will bring more smiles to Dennis’ face in years to come.