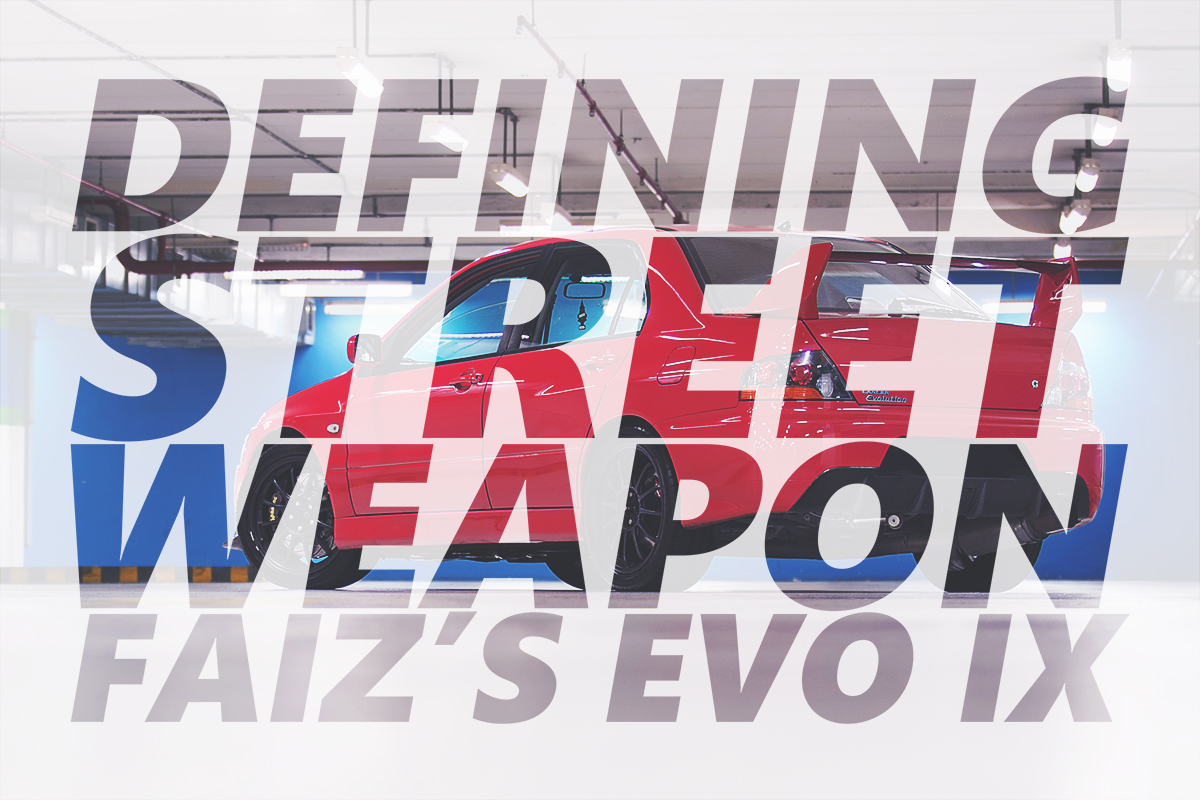 A street weapon awaiting its prey.

Those of you who read Because RC would know that the Mitsubishi Lancer Evolution means a lot to me (Brian). After almost a year of running becauserc.com, finally we are going to dedicate a month to the Lancer Evolution! To say that I am excited would be an understatement. However, for this special month, all of the cars we feature would be from the third generation body style carrying the model code “CT9A” that covers the Lancer Evolution VII to IX MR due to car availability.

Most of the time, this is the view you will see.

The interior is stripped as Faiz wanted to test the agility of the EVO with a stripped interior.

The Motec C125 display/data logger allows Faiz to keep an eye on all the engines vital parameter. The items to be displayed could be fully customized and warnings can be set accordingly too. The two button at the side allow Faiz to control the C125 display.

Anyone want to go for a b-road blast?

Nothing screams functional as loud as a Recaro seat.

The Lancer Evolution IX we are featuring today is a GSR variant which is the highest trim level and it is the most common variant all over the world. It is the variant of choice for daily drivers and Faiz uses his as one. Being as GSR, it came with the standard 6 speed manual transmission which is more pleasant for highway cruising and S-AYC(Super Active Yaw Differential) rear differential which is essentially a electronically controlled torque vectoring differential. The AYC has been featured in every Lancer Evolution GSR trim level since the Lancer Evolution IV. If you think the latest generation Ford Focus RS torque vectoring rear differential is impressive for a production car, Mitsubishi actually produced their production car with such devices 20 years ago! With no doubt, the Lancer Evolution is the halo car for Mitsubishis performance car line up back in the 90s due to its success in WRC. This is a rather odd scenario as the top dog of the Mitsubishi performance car line up was suppose to be the GTO/3000GT rather than the Lancer Evolution.

As you can see from the picture, the engine is kept mostly stock with only minor modification.

The airbox is custom fabricated to ensure the engine only sucks in cold air which helps a lot in reducing heat soak.

When Faiz is shopping for a daily driver he required it to be able to fit a children’s seat at the back and have an actual trunk to carry groceries, thus, the Lancer Evolution fit the bill well. When he spotted this Lancer Evolution IX up for sales, he went to have a look and a good financing deal means he decided to buy it. Faiz had always wanted a Lancer Evolution so it certainly contribute to how he ended up with this tastefully modded example of an Lancer Evolution IX.

Beside being a Daily Driver, Faiz frequently visits the touge with this car. After he bought the car, he did some changes to the suspension setup and added Cusco anti roll bars along with some braces. The handling and braking of this car is his favorite aspect of the Lancer Evolution with the handling balance being a point that stood out for him despite having driven his fair share of cars. He also states that all the hardware like the ACD(Active Center Differential),S-AYC and excellent ABS system gave him a lot of confidence when dancing through a corner.

RCS is now known as RDS. Their 3 way adjustable coilover setup features an external reservoir. This allows Faiz & RDS to dial in the perfect setup. Have your cake and eat it too? It is certainly possible with this setup.

Stance of a plug &play fitment for Lancer Evolution CP9A/CT9A. Spec like this require 0 fender work.