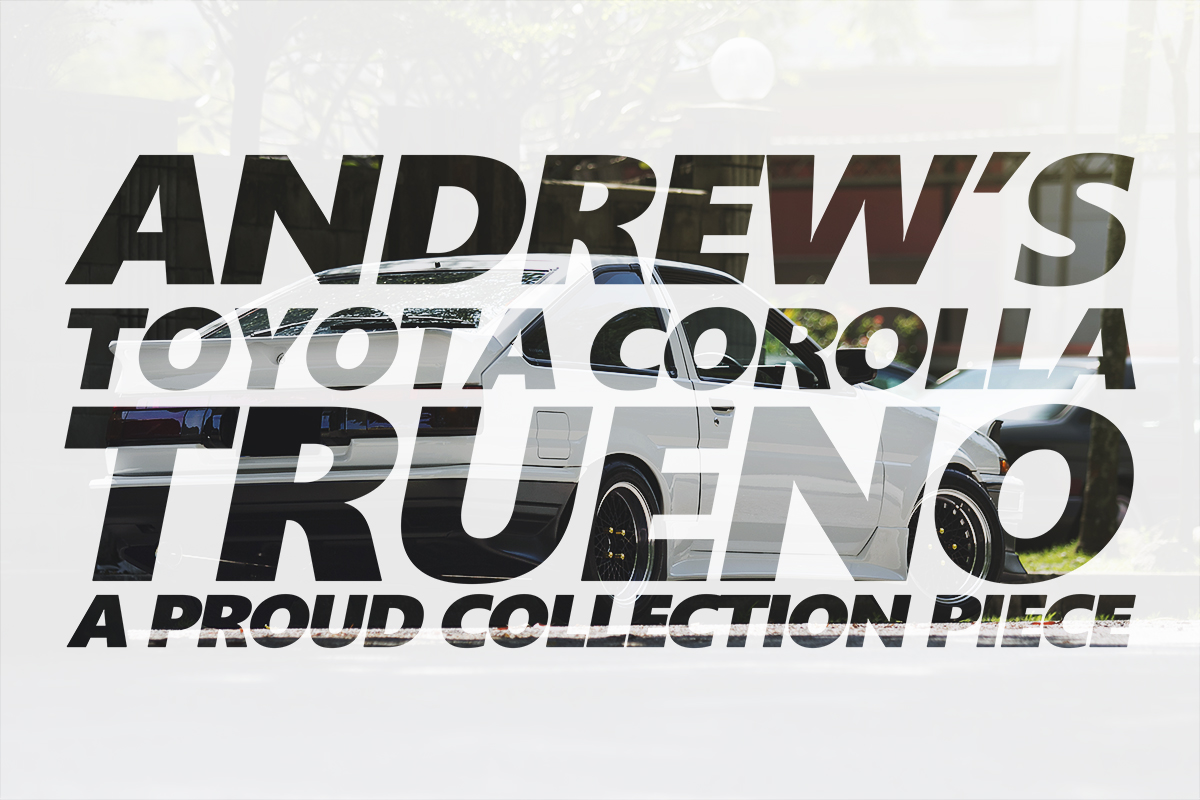 If you have the chance to spot a AE86 up close in the wild, chances are you will be disappointed with the condition. This is to be expected as even the youngest AE86 is 28 years old now. But that is not the case with Andrew’s AE86, converted from a AE85. When we first laid our eyes on this very car, there was a WOW factor to it. If you inspect this car closely, you will be very impressed.

What a lovely side profile.

You may ask, what is a AE86? In the 1980s, Toyota produced two separate lineup of Corollas. There’s the front wheel drive AE82 and there’s the rear wheel drive AE85 and AE86. Obviously, the AE85/AE86 was the performance version. AE85 is equipped with a 4A-U engine while the AE86 was equipped with a 4A-GE engine. The featured car today is a AE85 that has been converted to AE86. The main components needed are the 4A-GE engine and its associated component, a T50 5 speed manual gearbox and the rear axle. Beside the engine differences, the AE85/86 comes in 4 configurations. There’s the coupe and there’s a lift back like the car we are featuring today. The fixed light models are known as Levin while the pop-up light model are known as Trueno. In essence, the car we are featuring currently is a Trueno liftback AE86.

The spoiler is from TRD and there are add-on lip for the rear bumper of unknown origin. Anyone can shed some light?

Made famous by the manga series Initial D, AE86 is a car in demand all over the world and this certainly applies to Malaysia too. Initial D made it famous because this is the car of the protagonist, Takumi Fujiwara, specifically he drives a AE86 Trueno liftback. That is the reason why a Trueno liftback is the most desirable AE86 in general. With limited supply and a lot of demand, price is not exactly what you will call affordable nowadays. Even the prices for spare parts are not cheap with a lot of them being discontinued from Toyota Japan! When you come across an example like that, you can’t help but be impressed by it’s owner dedication.

The turnbuckle is actually the adjustment for the headlight motor.

Andrew just turned 30 this year and he owns a workshop that caters to the BMW/Mercedes market, DTM Benz service center. If you have read our previous article, you would know that car enthusiast that grew up in the 90s and 2000s are heavily influenced by japanese produced DVDs, Best Motoring and Hot Version. Before the YouTube era, they were the bomb. One of the main host, world re-known Keiichi Tsuchiya or Drift King, is a big fan of the AE86 because he also started off with a AE86 in his professional race driver career. Even to this day, he owns at least two of them with one being a street car and the other being a N2 spec race car. Besides being a racing driver, Tsuchiya is the consultant for the Initial D manga too.

Because of this, Andrew put the AE86 into the list of cars to own. This very AE85/AE86 was advertised in a classified site for a very reasonable price in Malaysia. Before Andrew brought it, it was already modded with AE86 conversion, hydraulic handbrake twin brake caliper setup , double spot welded chassis and sprayed in black. The price attracted Andrew to look at it and decided he have to own it and a deal was struck. Initially, he thought of just driving it but there were issues with the car, which prompted him to strip the car down to bare shell and start a 6 months long restoration project, which is actually quite fast for a project of this scale.

2 x Recaro SP-G fixed bucket seat for both driver and passenger. Why? BecauseRaceCar! 😀

A lot of work was done to have a AE in this pristine condition. The whole chassis was sprayed in alpine white from BMW, the engine and wiring harness got a full rebuild job to stock spec. While at it, he did a wire tuck in the engine bay. All the aged parts is either refurbished or ordered new from Japan. The exterior got a mixture of body parts from Vertex, TRD and the paint scheme mimics Keiichi Tsuchiya’s personal street AE86 with the exception of the hood being in black instead of green. Tsuchiya’s own car has a special green carbon fiber hood to match his racing suit.

I reckon this is the coolest and most unique mod in the whole car.

In our opinion, the interior of this very AE is the highlight of this build. The dash, door panels and rear planned is trimmed with Alcantara. The door card even features a Porsche 911 GT3-RS inspired pull strap which is uber cool! By far, this is the best AE86 interior we have seen personally. As you can see from the quality of the restoration, Andrew intend to keep this car for awhile and be proud about it. As for the future, he intend to enjoy this car. However, a 3SGE with 6 speed manual transmission may find its way under the hood soon.

AE86 fans over the world will know how rare is this parcel shelf.

Recaro SP-G fixed back bucket seat (Driver and passenger side)