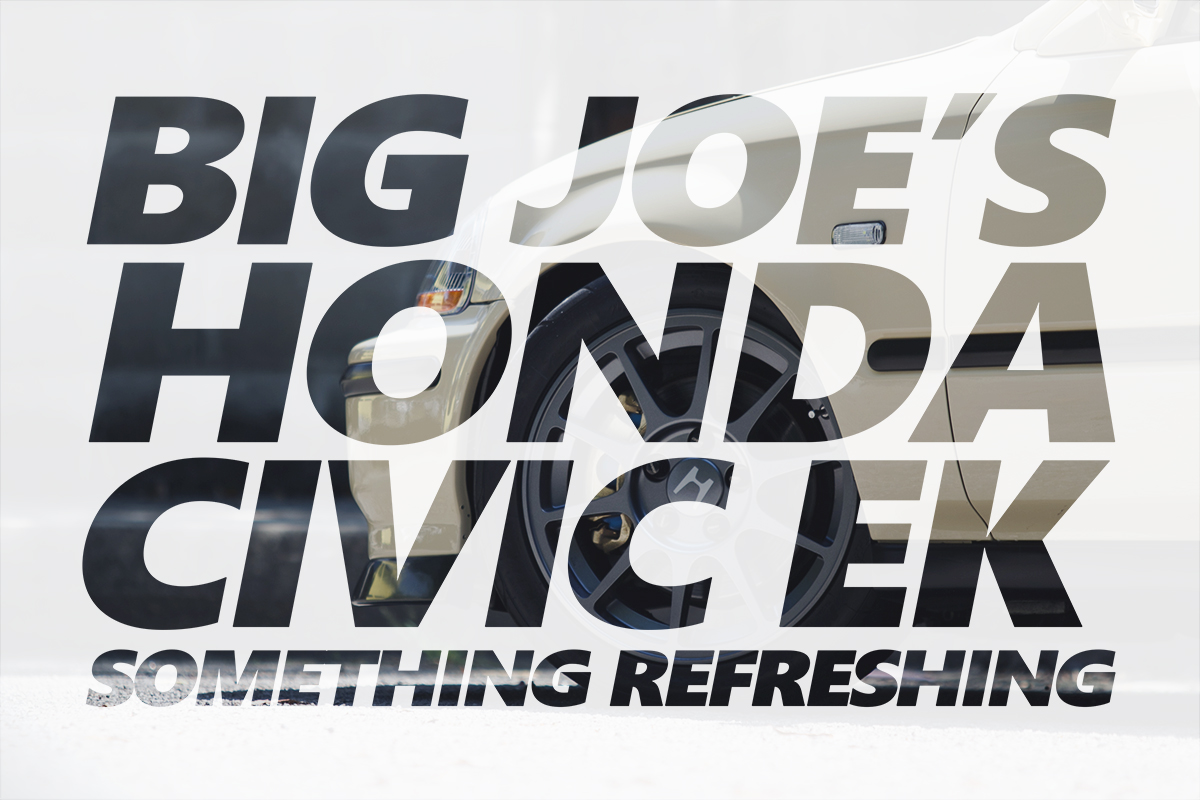 This is how does the front of Big Joe’s EK with 96 front end look like.

What do you guys think about this shade of cream colour? Certainly something you don’t see everyday eh

As the saying goes, “Variety is the spice of life”. For a lot of us who happened to be car enthusiasts, running multiple performance cars are a pipe dream. However, for Big Joe it is a reality. If you have a good memory, Big Joe is the owner of the 710WHP Soarer we featured the last time. Today, we are bringing you the feature of one of his recent project, a Honda Civic EK that features heavy influence from the US showcar builds.

Some of you may wonder, what we meant by featuring heavy influence from US showcar build? The cars from show car events in US like Wekfest, Year 7, Eibach meet, etc have their own very distinctive vibe that took inspiration from Japan and yet is so different. It is so popular that in fact nowadays Japan actually takes heavy influence from the US show car builds. It usually features a very aggressive wheel fitment, unrealistic ride height to be used in the real world, shaved/tucked engine bay and very clean exterior/interior. A visit to http://stickydiljoe.com/ and you will know what i am talking about. As you can see in the picture, Big Joe takes cue from the US build guidelines.

Rather than aftermarket wheel, Joseph opt for Integra Type R DC2 98 spec wheel and refinished it. We must say this is a rather unusual decision that we like too.

While we don’t usually feature a show car influenced build on BRC, we think that Big Joe’s Civic EK is special and we definitely have to feature it. You may ask, why would Big Joe crave for a Honda Civic with him being a devoted Toyota JZ enthusiast? Well, variety is spice of life and he mentioned that a Civic like that reminded him of his younger day. When Big Joe bought the chassis, it was a local Civic hatch chassis converted to Honda Civic Type R EK9 with Honda B20B inside it. After he got the chassis, he parted with the said engine to a friend who wanted it. The chassis was then torn down to bare chassis and resprayed.

You can see the alcantara wrapped dash more clearly here.

Another picture tat show the stitching of the alcantara dash and Defi Advance ZD. From our experience, Defi Advance ZD have been rather popular lately. Even we at BRC certainly like it.

The engine bay is painted in white colour while the exterior is painted in this shade of cream. For the exterior, he decided to reverse convert it back to 96 spec Honda Civic EK body panel from Honda Civic Type R EK9 body panel that was on the car when he brought it. I am sure all of you would agree that a look like this is rather refreshing especially with so many Civic EK hatch with Type R conversion roaming on the streets of Kuala Lumpur. The reason Big Joe went for an exterior like that is to standout from the rest of the crowd. In our opinion, he managed to do this very successfully. If there is an award for a standout Honda Civic in Malaysia, this car certainly would be in contention.

We are glad that while the exterior and engine bay took cue from US showcar scene, the wheel fitment and ride height does not. In a way, this is best of both worlds from our aesthetic point of view. If you thought the exterior is special, pop the hood and there will be WOW factor. The venerable Honda K20A engine from Honda Integra Type R DC5 along with its gearbox found a place in the engine bay.

Hasport engine mounting that make this swap possible and painless.

The K20A powerplant actually resided in a Honda Civic EK 4 door sedan that Joseph had prior to this. After the powertrain spec was tested and finalized in the Civic EK 4 door chassis, the whole setup was transferred over to this Honda Civic EK hatch that we feature today. Internally, this K20A remains stock with only major changes being the Skunk2 intake manifold. In this trim, it put down 206WHP.

This is actually a dip stick from K-Tuned.

While most of us would be over the moon with a K Series residing in the engine bay, Joseph went one step further by getting his body shop and car builder, Power House Racing to perform a full wire tuck/shave. This is certainly something fresh in Malaysia scene. We must say the wire tuck is tastefully done yet the car remain a practical car to be use with the brake booster etc all still in place.

The radiator hose will soon be replaced with silicone hose.

So you may ask what next for Big Joe’s Civic EK? Only minor changes will be performed such as a pair of Recaro SP-G fixed back bucket seat, some different cooling components will be fitted to complete this build. And this certainly won’t be the last Civic he built with more in the pipeline. Hopefully in future we can see more refreshing builds like that in our local scene.

See you next time!