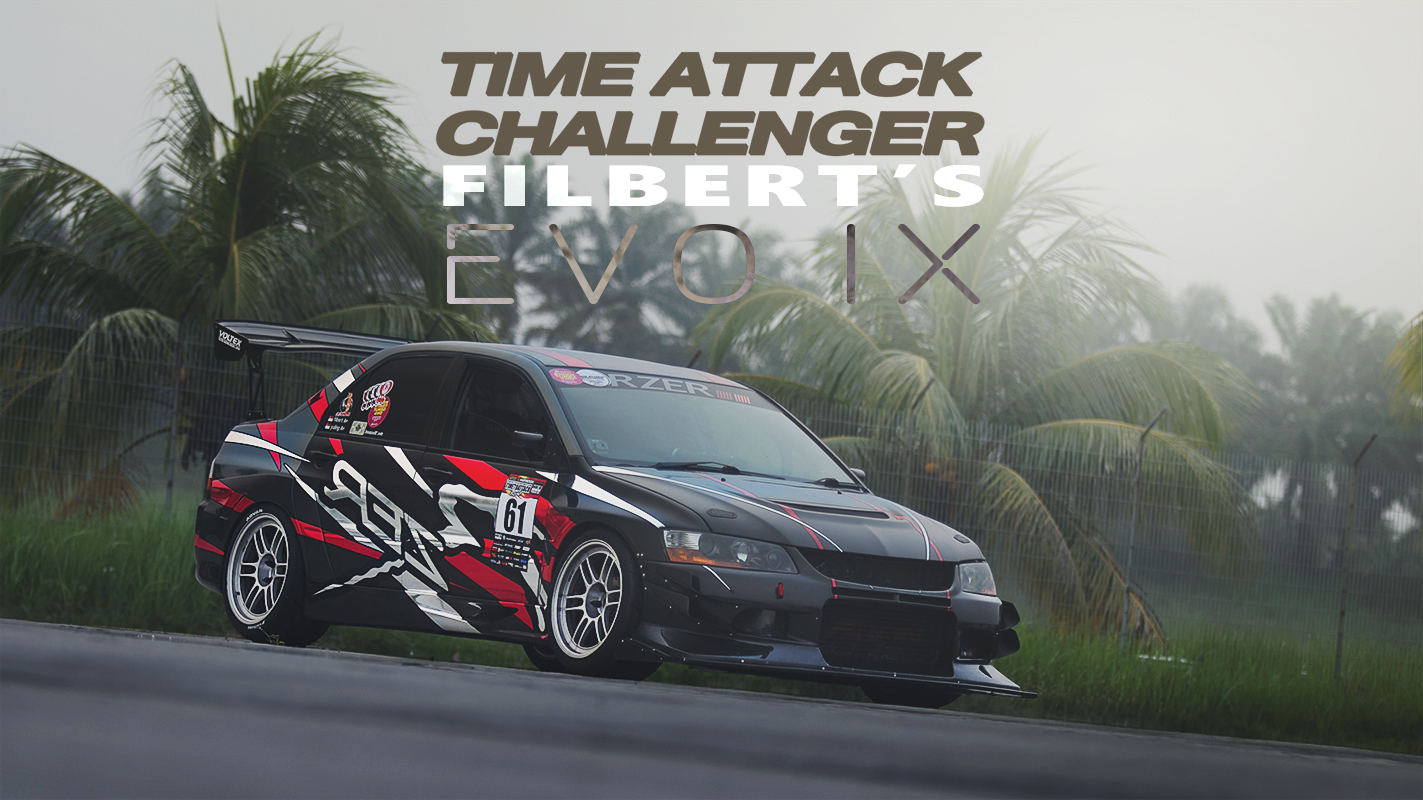 For those people who are familiar with the Malaysian/Singaporean Time Attack scene, you may have taken note of Filbert’s Lancer Evolution IX RS2. He is a frequent competitor of zerotohundred.com TimeToAttack Super Street Turbo AWD class. Another point to note is all his colour schemes would leave a rather deep impression; from Red/Carbon fiber doors to Black Chrome/Carbon fiber door and the current RZER livery. RZER is a group he founded with a few like minded friends in Singapore. I first spotted his car during Round 1 of 2013 TTA event which happened to be my first visit to TTA. His car left a rather deep impression as he was the winner of the Super Street Turbo AWD class.

If you ever see this view in rear view mirror in Sepang, move over!

Filbert’s Lancer Evolution IX is a RS2 variant. It is not an official variant from Mitsubishi for JDM market as there is only GSR/GT/RS. After some digging on internet, it is a variant imported by a Singapore parallel car importer. On paper, everything matched up to be a RS as there is only came in red/white colour option, 1.5 way mechanical rear differential and no rear wiper. However, RS2 came with automatic aircond which RS does not come with.

After knowing him personally for awhile, I found out that he loves anything with wheels. From being interested in mountain biking during high school days to motorcycles during college days to cars during adulthood, he has tried them all. In his opinion, being a good rider makes the transition to be a good driver is much easier. Because motorbikes are much less forgiving, it is important to hone your senses to feel when you lose traction as the price to pay for making mistakes with motorbikes are much higher than driving a car. Hence, the sensitivity of the traction threshold does carry over to driving and make driving fast much easier.

The sequential shifter is an item from Kaps. This shifter convert a h-shift pattern gearbox into sequential shift pattern. In future, when Filbert request for ignition cut during upshift, he just need to yank the shifter to go into next gear, shaving precious milliseconds during hotlap and margin for error is greatly reduced.

Want to go for a hot lap around Sepang International Circuit?

Defi Advance ZD, and Kaps gear indicator allow Filbert to keep an eye on vital parameter during a hot lap. If anything out of ordinary arise, there will be alarm going off.

A HKS EVC 6 IR boost controller and Defi Advance controller took place of audio headunit that once reside in this car when it roll out of production line. Why? Because RaceCar

In the 90s-00s period, the street scene in Singapore was more interesting than what it is now. At that time the Lancer Evolution was one of the kings of the street. But the Lancer Evolution is not only good on the Street or in Touge only, there is a lot of potential in them for Circuit Racing too. I believe at this point, the Lancer Evolution is a very well proven platform for building a time attack car with notable car such as Tilton Interiors WTAC Pro class spec EVO which is the only car that managed the feat of attaining 3 back to back overall champion wins for WTAC, Cyber EVO which won WTAC overall with 2 back to back wins and HKS CT230R which is the fastest AWD tuner car (To this day since 2007 with time of 53.589 seconds!) at Tsukuba Circuit where time attack started for a lot of us. It is considered as one of the most important record for time attack enthusiasts all over the world. These are some of the most notable example of Lancer Evolution built for the sole purpose of Time Attack Racing. Needless to say, Filbert is familiar with these cars and he considered builds like that as his inspiration.

One interesting addition is the heatshield for cam sensor that is custom fabricated. Due to the proximity of cam sensor from exhaust manifold in an aftermarket setup, it is a good idea to create a heatshied for it to prevent failure as cam sensor failure due to heat is well documented.

Full-Race is one of the most reputable manufacturer for turbo kit from US. Filbert opt for their T3 Twinscroll turbo kit with Garrett GTX3076R turbo.

Presently, his own personal best is 2:22.492 on used 295/30/18 Hankook Ventus TD during final round of TTA 2015 time attack machine >2200cc session. His best time during the Super Street Turbo AWD session of the same event is 2:24.753. He was able to shave off 2.261s off his lap time right after swapping out for a fresher set of Hankook Ventus TD from his used Advan A050 and trying out some different suspension setting. However, after reviewing the video, we agreed that 2:22 is nowhere near the potential of the car as it stands as Filbert is still getting used to his car with the new overall setup with limited seat time.

This beautiful titanium front strut brace is an item from Carbing. Beside being a front strut bar, it feature an integrated brake master cylinder brace.

This is a Tein pillowball camber plate. The suspension attached to it is Tein SRC(Super Racing Coilover) two way adjustable coilover with separate rebound and compression adjustment. This allow ST Powered crew to fine tune the handling balance according to condition.

Ever wonder what makes his car tick? Beside his driving, he has the right combination of parts to archive this level of performance. For the engine, it is powered by a MIVEC 2.2L stroker 4G63, Full-Race T3 twin scroll turbo kit with Garrett GTX3076R turbo combination. After consulting with his tuner Jun of ST Powered, they have decided upon Motec M800 engine management. While the gearbox casing is a stock 5 speed manual item, the internal gear set is upgraded to Albins straight cut dog engagement gears paired to Kaps SSS sequential shifter. The ATS Carbon rear differential and Wavetrac front differential make for better traction feel/threshold during the corners. For the dampers, Filbert opted for Tein Super Racing Circuit Master 2 way (Separate compression/rebound) adjustable coilover. The wheel of choice for time attack is Enkei RPF1 18×10.5+15 wrapped in 295/30/18 Advan A050 or Hankook Ventus TD Z221 medium compound rubbers. The aero package is the tried and proven Voltex style cyber street wet carbon widebody kit and Voltex Type 5 GT wing with extension and gurney flap as used in Cyber EVO.

The wheel of choice is good ole’ Enkei RPF1 in 18×10.5+15 spec wrapped in Advan A050 or Hankook Ventus TD Z221 295/30/18 medium compound semi slick. Why Enkei RPF1 instead of more expensive forged wheel? For a privateer, it make sense to use cheaper but still quality cast wheel such as RPF1 to keep running cost down as you may break a wheel during racing. When that occur, it is much cheaper to replace a cast wheel than a forged wheel.

The wheel/tyre spec for the rear is the same as front.

So where do you go from after having a road registered EVO built to this level and archiving such level of performance? While Filbert’s EVO is not as radical as the now infamous Under Suzuki Silvia S15, he shares the same determination and the desire to develop a road registered car perpetually for as long as he can. His plans for 2016 includes a new GT wing and engine rebuild as part of routine maintenance. Of course, he still have a lot of exciting upcoming plans and we plan to follow Filbert and his journey to the future with his EVO. The short term goal? Keyword: Sub 2:20. Long term goal? Stay tuned 😉

This is one of the most functional/popular gt wing around! 3 of our feature car for EVO month feature this gt wing! In this instance however, FIlbert opted for wing mount extension and gurney flap which Voltex sell. Both of these accessories is as used in Cyber EVO. However, Filbert plan to go for even bigger rear wing.

This is the fitment shot of FIlbert’s setup. As you can see, it fill out the wheel well rather nicely. To run a fitment like that, widebody fender is needed. As mentioned previously, one individual have to be dedicated to the car when he make the decision to install a widebody on the rear as quarter panel need to be cut to allow for fitment of aggressive wheel setup such as this. In Filbert’s opinion, Lye Designs(Bodyshop/Custom fabrication shop) did fantastic job in cutting the fender to ensure no rubbing occur even under the highest cornering load.

Tuned by Jun of ST Powered