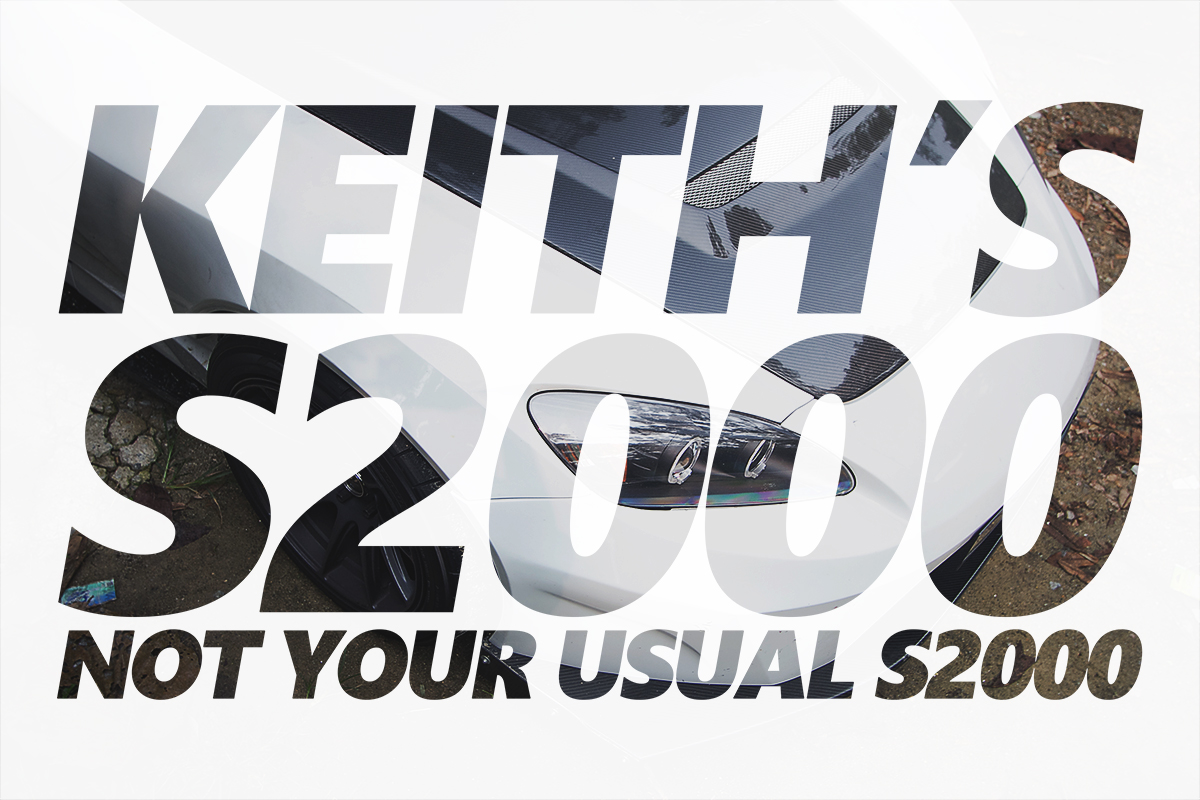 This is a shot taken during TCC(Traction Circle Club) trackday before TTA 2015 Round 2.

I am sure there are quite a few people who would have noticed that there was a white Honda S2000 with a carbon fiber forward facing airbox located outside of the engine bay during the zerotohundred.com TTA (TimeToAttack) round 2 2015 event. Its owner, Keith also managed to grab class record for Street NA-FR class from fellow S2000 driver from Malaysia, Steve Toh with 2:34.457 on RON97. Ever wondered what made that car tick? We will attempt to answer that question.

The fender is an item from Tamon Design. Nice? This allows for fitment of much wider wheel and tyre size which result in wider track.

Surprisingly, Keith actually choose this wheel because he enjoyed the look of it which is refreshing.

Keith hails from Singapore and he is a very serious enthusiast with strong background in motorsports. He runs an outfit that specializes in tuning Honda NA cars, Torq Project. While Torq Project does not have a physical workshop, Keith possesses amazing knowledge about how to extract maximum performance from the Honda NA platforms. Highlights from past include a drag engine package for a Honda EG drag car in Kuching, outputting 384WHP on Dynojet with its methanol K27 setup which he believes might just be one of the highest HP NA Honda K Series in Asia.

If you see this view behind your rear view mirror in Sepang International Circuit, move over if you can’t at least clock a lap time of low 2:30s!

The front bumper is also an item from Tamon Design.

Growing up, Keith is obsessed with cars and motorsport in general. Because of this, he is constantly messing around with Tamiya mini 4WD and remote control buggies. During his teenage years, he already does off road riding when he was still in Singapore. His early motorsport inspiration was Colin McRae and his Subaru Impreza. He fondly recalled that before the age of Youtube, sourcing for Best Motoring VCD/DVD was not easy. Yes, VCD/DVD of which your truly have also watched a fair share of it. During that time period, he always spectates the Car Park Rallies at the Singapore National Stadium and the car of choice in those days were Honda Civic Civic EG and EK.

The rear overfender is based off ASM overfender. However, it have been extended to be even wider!

Soon, Keith left Singapore to pursue further study in the UK. It is in that time period where he learned a lot about engines and motorsports. On his third month in UK, he brought a Honda CR-X with ZC engine which he took train down to Leicester from Manchester to pick up. During his time in UK, he was exposed to BTCC (British Touring Car Championship) touring cars and WRC (World Rally Championship) cars. Being near to the motorsports valley of UK, Northampton, certainly helps the case. During his time in UK, he got very involved with mechanical aspect of motorsport. He also attended the first ever class of EFI University and completed advance tuning course with Ben Strader.

Guys, this is how 288WHP all motor setup on RON97 F20C based engine package look like.

Since then, he went on to own 5 CR-X and several other cars. On his return to Singapore, he brought a Honda CR-X of which he specced it up with a B20B, Jenvey ITB (Individual Throttle Bodies) and Hondata S300. He eventually got around to spot weld the chassis and fitted a roll cage. He actually daily drives that CR-X in that state! He did many Pasir Gudang trackdays with this Honda CR-X. After that, he brought the very Honda S2000 we are featuring today. This is a 2008 JDM AP2 car with F22C which is a car from very end of production for S2000.

Reverie airbox from UK that Keith elected to mount it forward facing outside the hood to get proper ram air effect. The silicone joint is just a temporarily solution until his 3D printed angled velocity stack have arrived.

As a NA engine enthusiast, Keith believes that the cylinder head, valvetrain and intake is the most important aspect that determines the power of a NA engine. According to Keith, 2 key points for cylinder head optimization is important are maximum quality airflow from the ports, followed by most area under the curve valve lift profiles. Because Keith believe in pushing the boundary beyond what off the shelf parts have to offer, he often develops his own parts such as cylinder head port, camshaft profile etc etc. It took him 1 year to seek for a camshaft technical partner having first making contact with camshaft manufacturers in USA and UK for custom camshaft profiles. While he was reading Race Engine Technology one fine day, an article written by Ken of Cat Cams caught his attention on topic of flat nose cam profiles for racing class with valve lift limitation. He decided to e-mail Ken and talk about camshaft for Honda VTEC application. Since then, Keith have been designing custom camshaft profile that Cat Cams manufactured.

See how the design of this ITB have no shaft at all? That is the special shaftless design ITB from UK manufacturer, AT Power and Keith is the sole distributor for Southeast Asia.

After Keith became owner of the S2000, Keith started his engine development work for the F22C. During that period, he discovered a nice ITB setup from an UK outfit known as AT Power with its billet shaftless design. Conventional wisdom believes that ITB will cause bad idle, bad low end drivability etc. Keith does not believe in that and he did the development work to make it work perfectly on the street. In fact, Keith said the powertrain package is one of the most satisfying aspect of his car. The 2.7L really does improve torque by a huge margin, which makes a lot of usable power for daily driving around the town below the VTEC zone.

For the 2016 season, there will be revisions made to improve his lap time around Sepang International Circuit. He is aiming for nearer to 2:30 on street tyres. The planned upgrade include DBW(Drive By Wire) throttle control which allow for advance traction control strategy that Syvecs ECU offer and will certain shave off precious lap time, Syvecs standalone ECU, E85 as fuel and the most radical change of all, a DCT gearbox. Hopefully all of this materializes and we will see an even better lap time from Keith and the Torq Project S2000. Indeed, Keith’s S2000 is not your usual S2000.

Invidia cat back for street

For those who are interested to make big power with NA engine, please drop him a line at Torq Project’s Facebook page.