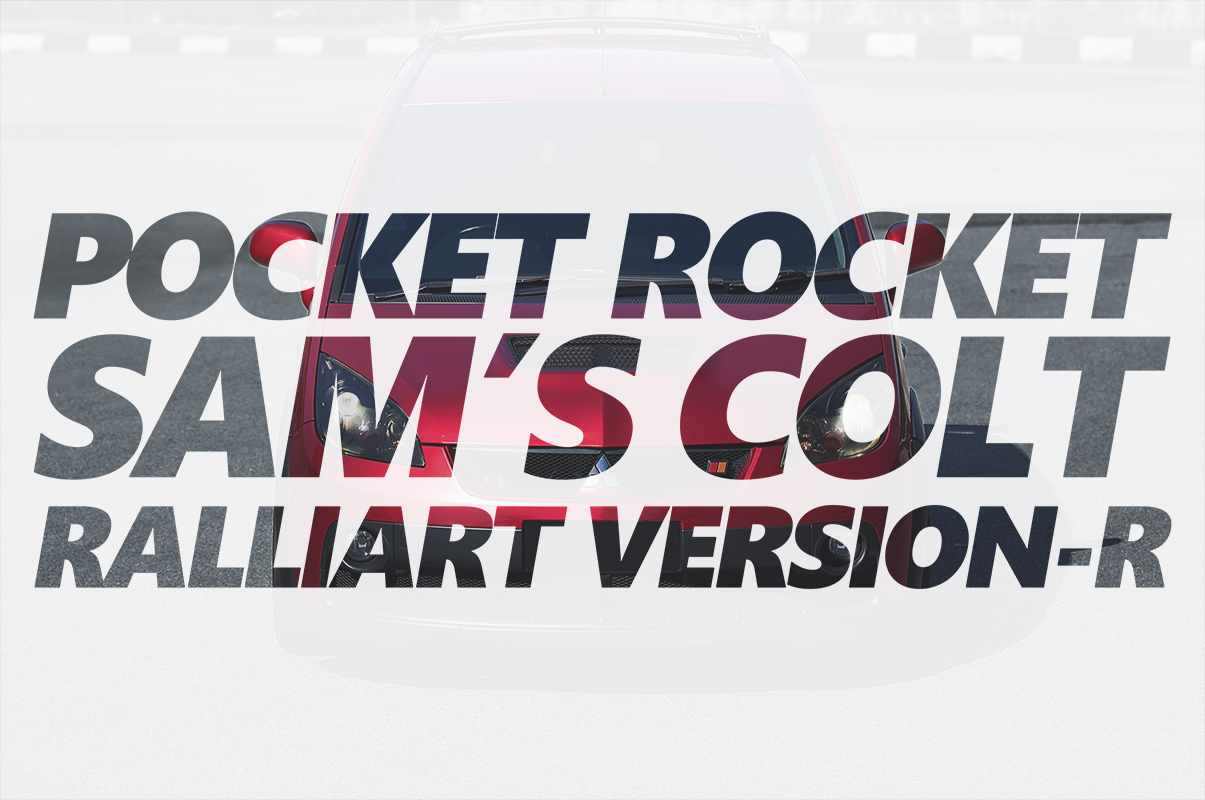 I’ve never been inclined towards hatches or hatchbacks but sometimes cars like the excellent Renault Clio 197 or the raw EK9 Civic type-R are an exception. Another car that qualifies this exception is Mitsubishi Colt Ralliart Version R.

Designed by a team that included one of my favourite designers, Ken Okuyama of Ferrari Enzo fame, the Colt Ralliart was meant to excite enthusiasts that wanted a more affordable option when compared to it’s much bigger brother, the Mitsbishi Lancer Evolution series. Interestingly, its platform is shared with another car, the Smart ForFour.

Oh god, just look at it. How would you not want to take it up some back roads and just carve corners with it. This particular Colt is owned by our friend Sam and the story goes that he was then at the time on a lookout for a new car. Thru a friend he was told to lookup Colts and it was love at first sight. With its unique look and boy racer feel it certainly would stand out in the sea of Perodua Myvis we have on these shores. This particular car was located on the Eastern Peninsular of Malaysia and when Sam found it, bravely enough, booked and bought it sight unseen. It was then shipped here into the Western Peninsular not long after.

Powered by Mitsubishis turbocharged 4G15 unit with MIVEC producing in the area of 150HP it made the little car a sprightly performer zipping from 0-100km in around 7.5 seconds. Match that with a kerb weight of a ton and stiffened suspensions all around its no surprise this particular Colt is entertaining on mountain roads.

…and a Colt Speed Air Box. Other additions to the engine is a Greddy type-S blow-off valve and also a Colt Speed muffler with a 2.5″ exhaust piping.

….is the addition of these wonderful set of Recaros. Those who are familiar with their Evolution may notice that these seats are shared with the Evolution 10 which is rare for these Colt Ralliart Version R.

A simple cluster of instruments is coupled with…

…a much more dramatic set of gauges designed by Defi for Ralliart is so appropriate. This helps Sam determine his temperature, oil pressure and boost are working perfectly. Other additions to the electrics is a reflashed ECU with ECUFlash open source software and a turbo timer by ARK.

Chassis-wise the Colt wears 15″ Enkei Tuning SC22’s and sits on one way coilover from JIC. Bracing from Ralliart and Beatrush further strengthen and lines the undercarriage on top of the additional spot welding point specific to Colt Ralliart Version R from factory.

Even from this angle it looks like its ready to cut thru some forest rally at full throttle as the styling is inspired by Lancer Evolution CT9A.

Being a car thats so strongly tied to its Evolution and rally heritage, I’d say this Colt scores a lot in personality without being too obnoxious. Its such a nice little package too having the practicality of a 4 door coupled with a capable little motor. For the future, Sam plan to increase the power of this little quirky pocket rocket to 200WHP with addition of hybrid turbocharger and remapped ECU.

Pocket Rocket that stand out? Most definitely.