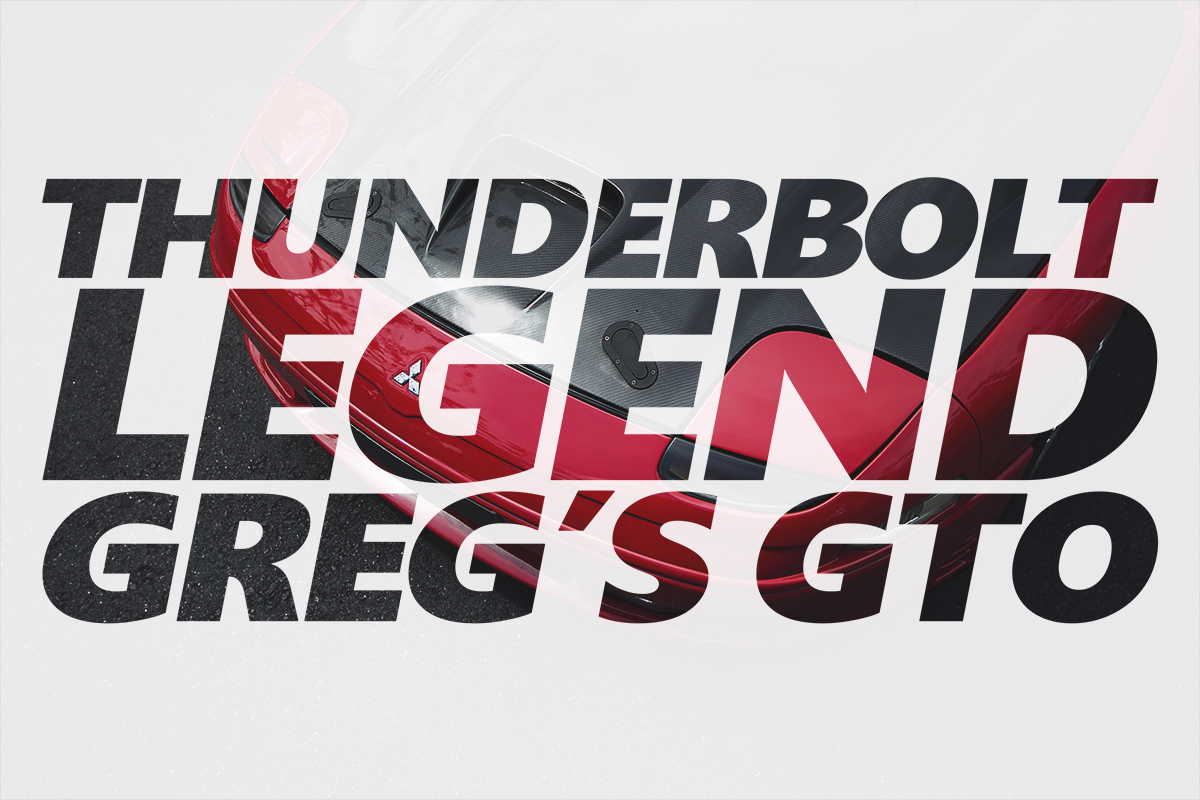 The 1990s was a great era for the Japanese performance car. A lot of car enthusiasts, including yours truly, agree that it was the golden era for the Japanese performance car. The coveted icons were the Nissan Skyline R32 to the R34 GT-R, the Mazda RX-7,the Toyota Supra,Honda NSX and the left field choice of Mitsubishi GTO. Compared to its contemporaries, the GTO was less well received.

Pop up headlight denote this particular example of GTO as phase 1,

Let’s kick start our first of three installments of our Mitsubishi special with a bang in the form of Greg’s Mitsubishi GTO. Back in the 90’s, the Lancer Evolution is the car that everyone loved due to its success in rallying . In the 90s, Mitsubishis performance car hierarchy was something like this: a 4G92 MIVEC based car such as the Lancer MR,Mirage Asti & the Mirage Cyborg takes on the Honda B16A powered cars head to head.Then there were the Mitsubishi Lancer Evolution camp for those who idolized after Tommi Makinen going through the forest as quickly as possible and generally regarded as the best performance car platform Mitsubishi has ever made with endless support from the aftermarket industry. There are Mitsubishi FTOs for the compact coupe choice and it had a quirky 6A12 engine when compared to its contemporaries. Our editor Sean remembers that it had a sweet auto transmission called the INVEC-II that had gearchanges that tasted like vanilla,probably because it was a development from Porsches Tiptronic transmission at the time. Then there was the 8th generation Galant VR4 which was the big performance sedan with a 280HP 6A13TT engine and AYC rear differential.The GTO was positioned as the halo GT car with its big coupe body and plenty of technological wizardry. The 90s was indeed a very interesting period for the Mitsubishi performance car with something for everyone.

Period correct Volk Racing Evolution 3 wheel is the wheel of choice for Greg. Personally, we think this is rather suitable choice as it is period correct.

You may ask, why running staggered wheel setup like this won’t cause damage to the AWD system? After careful consideration, Greg choose a combo that give the closest possible tyre outer diameter. Usually, most AWD system won’t damage itself if the front and rear tyre outer diameter is same or have a very small difference.

The Mitsubishi GTO was conceived when the Japanese economy was on a roll, hence, it featured a lot of technology such as 4WS(4 wheel steer),full time four wheel drive, active aerodynamics, adjustable exhaust valves and adjustable suspension.These technology was onboard a GTO by 1990! Clearly, the GTO was one of Mitsubishis technological showcase platform. Due to the agreement between Mitsubishi and Chrysler, badge engineered GTOs were sold in the North American market as the Dodge Stealth.In some markets, the GTO is known as the 3000GT. The GTO was produced from 1990 till 2000 for the Japanese market. The GTO is further differentiated into three phases with phase 1 featuring a pop up headlight and phase 2 and 3 featuring a fixed headlight.

The rear glass have a rather complicated geometry.

Greg’s GTO is a 1993 JDM unit with an NA engine and an automatic gearbox. This mark is as a phase 1 car. According to Greg, this car is an ideal base to swap to twin turbos and manual transmission because it features the same AWD and 4WS system as the twin turbo version. Greg is unsure of which owner in the history of this car had the conversion done. When he got the car, it was already converted to twin turbos and manual transmission.

3SX performance is a famous GTO aftermarket parts manufacturer out of Carolina, US.Greg mentioned that they are one of the main place he ordered parts be it OEM or aftermarket from. In a way, they play a big part in Greg’s ownership of GTO.

Hong Kong famous actor Jackie Chan was a spokesman for Mitsubishi and Mitsubishi vehicles are predominantly seen in his films. The film, Thunderbolt released back in 1995, raised the desirability of the GTO to stratospheric value due to its appearance in the film. This effect could be felt clearly in Hong Kong as there is a huge following of the GTO out there. Interestingly, Greg only found out about Thunderbolt and its link to the GTO after he bought the car. When Greg is presented with the question of what attracted him to the GTO, he told us he loves the shape of the GTO as it capture the spirit of the 1990s JDM spirit rather well.The first time he saw a GTO in real life was when he visited a used car dealership to view this particular car and he was blown away by the look of it.

The red piping is actually a HKS intercooler piping kit which connect the turbo to HKS intercooler. It’s an item Greg got if off a half cut and this is his favorite mod.

Even the air filter is a icon from 1990s~2000s JDM car tuning scene! They are known as “mushroom head” due to their appearance.

In his opinion, with the GTO being the left field choice of the 1990s, it strengthened the attraction of the car to him. Being a left field choice, it’s not a well known car amongst the general public and even car enthusiasts who is not a proper japanese car otaku. He enjoys the reception he gets from owning this car and loves to talk about it to people. He does take pride in keeping this GTO on the road as it is a rare sight nowadays with lots of examples either being abandoned or in a bad condition.

Plenty of work is done to refresh and restore the performance back to its glorious state. Most of the major running gear of the car received some form of TLC(Tender,Love,Care) such as a rebuilt engine,rebuilt turbochargers, refreshed subframe and a refreshed suspension component etc etc.Having just rebuilt the engine when we shot it, it was still running on a conservative setting for the break in.Even the 180KM/H speed limiter is still in place! When we took a ride in it, the strong torque in this V6 twin turbo powertrain certainly left a lasting impression. It certainly delivers its power very differently when compared to its contemporaries like the 2JZ-GTE and the RB26DETT inline 6. Greg hopes to get the car to 380WHP after he fits the boost controller and programmable ECU of which he hasn’t decided yet.He would love a new set of coilovers too.The ultimate long term goal is to have a responsive 550WHP setup.

This side sill with 3000GT script is an item which Greg imported from US of A.This certainly help in modernize the interior of GTO.

Pit Road M is a japanese tuner which is famed for their GTO track car. In some Japanese club level race, it did well against other tuner car despite the weight deficit.